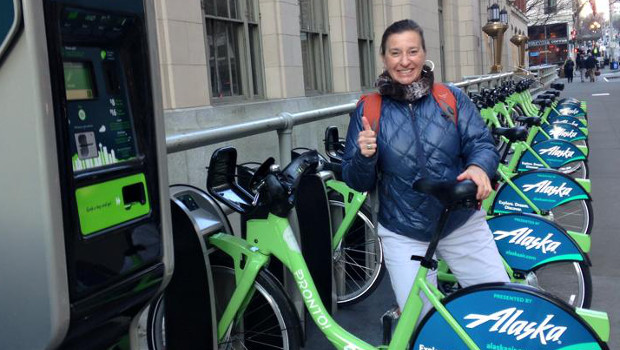 Here in Seattle, ferry commuters are a “special” breed. We treasure the solace of living on Bainbridge or Vashon Island or the Kitsap Peninsula, with a state ferry system connecting us to the city. But most of us travel between 90 and 120 minutes to work each way. The commute is a schlep.

Always trying to find a few more non-commuting minutes in my day, I decided recently to try our new Pronto bike-share program, which has 50 bike stations primarily around downtown Seattle. I opted for a three-day stint before committing to an annual membership. For $19 including tax, I got 72 hours of Pronto bike access, a fresh helmet every time I ride, and my own key fob which unlocks a bike at any of the stations. (By the way, good thing they have those helmets! The authors of a recent paper by Washington State University, based on their study of bicycle-related head injuries in cities with bike-share programs, recommended that the programs provide helmets. King County, where Seattle resides, enacted a mandatory helmet law in 1993 and updated it in 2003.)

After disembarking the ferry, I walked just two blocks to a Pronto station and paid for my three days using my debit card at their easy-to-use kiosk. It took about 60 seconds. I grabbed one of the sterilized helmets, picked a bike, popped my key fob into the station lock, and BAM! I was off and riding.

The first thing I noticed, even though I normally walk the 1.5 miles every day, was the uphill climb. I started to suck air pretty quickly. I also had to adjust to riding among Seattle drivers, who have become a little more edgy since I learned to drive here, their veins pulsing with a java buzz. But once I made it to the top of the hill, I picked up the new dedicated bike lane for a few blocks and then wove my way up to a Pronto station about 6 blocks from Group Health Research Institute. There’s actually another station closer, but it was farther uphill and I was spent. I unclicked my snazzy helmet, which made me look like a roller derby queen, and popped it into the used helmet bin at the station. I pulled my bike into a “parking spot” and waited for the signal that it was locked. Five seconds later, I was off to work. I might have saved only about seven minutes compared to walking, but I had way more fun.

In March, Seattle’s Pronto cycle share program, for which Group Health is a supporting sponsor, is celebrating women riders with a #WomenWhoBike campaign.

And then there’s the ride back to the ferry terminal. We’re talking almost all downhill. Other than red lights and jaywalking pedestrians (oh, how Seattle has changed since I was a kid), I barely had to pedal or brake. I was back to the Pronto station one block from the ferry dock in less than 15 minutes, almost half the time it takes me to walk. Yehaw!

The bike itself was sturdy, albeit a little heavy, and well maintained. It had fat tires and a meaty frame to tolerate the potholes and cobblestones in the streets of Seattle. The seats are adjustable. And the gear shifting is simple. Oh, and the mint green paint job is super hip.

Now I just need to get into better biking shape. I will try to do so, Pronto-style!