Will Julie get Parkinson's? 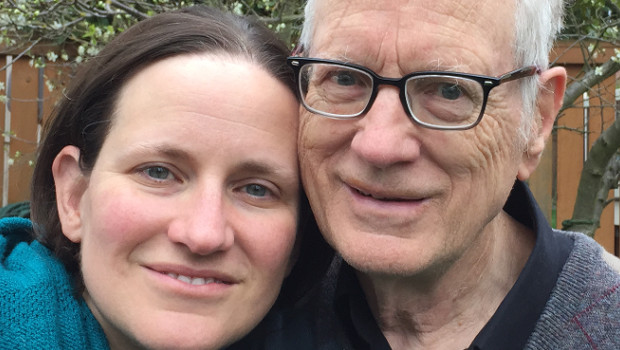 Pete Beidler asked his daughter, a public health researcher, how to talk about his motor speech disorder. Here’s her answer.

Pete Beidler is a father, grandfather, carpenter, and retired English professor in Seattle. He was recently invited to speak to a graduate class on motor speech disorders. He has no training in speech disorders, but was useful as a walking and talking demonstration of a man with the kind of soft, garbled, stuttering often associated with Parkinson’s Disease.

Wanting to get the class, mostly women, to think about how Parkinson’s might affect them personally, Beidler wrote a note to his daughter, Nora Beidler Henrikson, PhD MPH, a research associate and epidemiologist at Group Health Research Institute. Nora shares the exchange below.

About a million people in the U.S. are now afflicted by Parkinson’s, and the number grows by about 50,000 a year. In a classroom with, say, 30 grad students, can we predict how many will wind up with Parkinson's? Or, to put it differently, what are the chances that Julie Smith (made-up name), one of those students, will get Parkinson's before she dies?

Oooh! You’re getting into epidemiology and risk communication!! It is the coolest. Here are some terms the students might know and that you will find useful.

There are 50,000 new cases per year—those are incident cases and the incidence is 50,000 per year. When we talk about risk of getting a disease, it’s usually risk of becoming an incident case. While relevant to the million people and their families, these numbers are tangential to your question, I think.

You’re asking about Julie’s lifetime risk of developing Parkinson’s, which depends on age and factors like smoking. That number is calculated by following a group of people over time (a cohort) and seeing who gets what at what age.

Risk can be calculated as a function of “person time”: the total amount of life observed in the entire cohort. In Parkinson’s, incidence rates are 5 per 100,000 person-years at age 45, to 355 per 100,000 person-years at age 80. Lifetime risks are calculated using incidence rates, expressed as risk given that a person has survived to be in that age group.

I found a paper that might help with estimates of lifetime risk for Parkinson’s. They followed a cohort of male physicians aged 40–84 for 23 years. (Physicians are way easier to track and follow over time than most people).

They found overall lifetime risks for Parkinson’s in this cohort were:

So, from this one study, it’s easier to estimate the lifetime risk of Julian, not Julie, since all participants were men. This is important, since men are more likely than women to get Parkinson’s. That said, if all students in a class of 30 were at average risk and survive to age 75, about two would get Parkinson’s during that time. Chances are a bit higher that they would be men.

Oh, and the study found that smokers had a lower lifetime risk of Parkinson’s than nonsmokers. Lifetime risk for men who never smoked was 1 in 13 at age 45 and 1 in 22 at age 85. This is the kind of puzzle public health scientists like me love.

The study authors explain that most likely, smoking “decreases the lifetime risk of [Parkinson’s] by substantially increasing the risk of death from smoking-related diseases” such as heart and lung disease and cancer. Thanks for not smoking. And tell your grandchildren—my kids and my nieces and nephews—not to start.

Big help, Nora! So, if I had been a smoker I might not have lived long enough to get Parkinson's. Incidentally, I had two older sisters. The older one did not smoke and has Parkinson's. The other did smoke and did not get Parkinson’s, but she died of lung cancer ten years ago. So tell Hugo and Annie and their cousins that if they want to live long enough to have the pleasure, as I have, of getting to know their grand-kids, they should stay away from smoking. Grand-kids are fun!