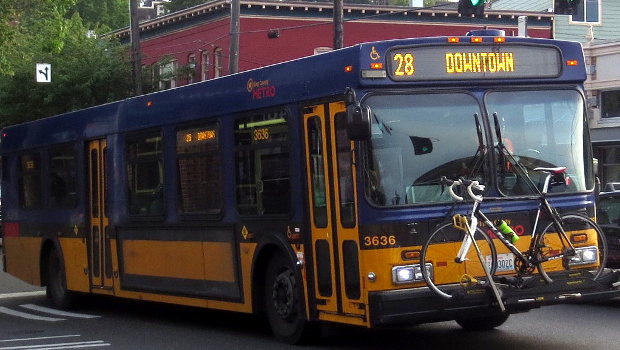 As we close out National Bike Month, Michelle Chapdelaine has a confession: She’s never biked to work. And she doesn't feel compelled to try.

I’m a University of Washington student with a part-time job at Group Health Research Institute. On days I have classes, I happily hop on my bike—the ride to campus is four miles round-trip from my house, almost entirely on a bike trail, and takes half the time of a bus trip. But when I think about biking to GHRI, I anticipate a longer trip (I’m not a very speedy cyclist), a change of clothes, and arriving in time to take a shower, not to mention gnarly traffic and distracted drivers. For me, the benefits of biking to work don’t outweigh what I see as added hassle and time.

If you've been thinking about trying a two-wheeled commute, go for it! May seems like the perfect month to give it a spin. But I want to plug the health benefits of another common mode of transportation: your local bus system. Taking the bus isn't going to get your blood pumping the way a bike commute would, but compared to driving, public transportation is the healthier choice. Here are some reasons why:

While biking to work is a great habit, it’s not for everyone. Luckily, public transit can help you incorporate more physical activity into your day, and is better for the environment than single-occupancy vehicles. And in King and Kitsap counties of Washington State, the bus is becoming even more accessible, thanks to a program that reduces fares for low-income earners.

If you aren’t already a regular bus commuter, make a commitment to increase your bus-to-work days this month, or take the bus somewhere you would normally drive. And remember, if you started a bike ride and changed your mind, in many areas of the country, including Seattle, you can always load your bike on a bus rack and try again tomorrow.

Michelle Chapdelaine is a Research Specialist with the Center for Community Health and Evaluation at GHRI, and an MPH student at the University of Washington School of Public Health.