Thanks to Group Health research, I helped save a life 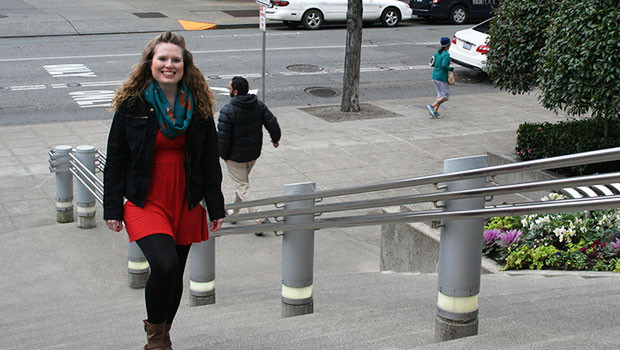 Recruiting participants for a colon-cancer screening study wasn’t easy. But a young interviewer discovered her work may have prevented someone’s untimely death.

I started working at Group Health Research Institute (GHRI) as a research interviewer eight years ago during my sophomore year of college.  I had just moved from Kentucky to Seattle about a year before, and I was still adjusting to the change from a small town to the big city. I was used to seeing grassy mountains, tobacco fields, and Walmarts, and now all I could see were skyscrapers, coffee houses, and Amazon buildings. It was a whole other world out here, to say the least.

When I first saw the job posting at GHRI, I was really excited to work for an organization that prides itself on helping people stay healthy. As a research interviewer, I was on the phone for up to eight hours a day calling people to ask them to participate in health research. The first study I worked on involved “reminder calls”: I called people to ask them to return a survey that had been mailed to them.

As you can imagine, it got pretty tedious after the first few hours into a shift. I’d say: “Hi, this is Kilian Kimbel calling from ... ”and click, people hung up on me … a lot. My very first job was telemarketing so you think I’d be used to it. However, it was still very discouraging. One person even told me “to fall over sideways and drop dead” right before they hung up.

Who wants to talk about colonoscopies?

Then, one day and 3,000 dials later, relief came. I started working on a new cancer-prevention study led by GHRI Associate Investigator and Group Health physician Dr. Bev Green. The study was an opportunity to link patient care to research. Little did I know that this new project would have its own special excitement: I had to talk with potential study participants about colon cancer screening. That’s right, colon cancer screening—not the most delightful topic to discuss with a complete stranger over the phone.

I called Group Health patients between the ages of 50 and 73 who were overdue for colon cancer screening and asked them questions about how they felt about screening. The goal of the study was to find ways to get more people screened for colon cancer and to make sure people received the follow-up care they needed based on the results of their screening test. Some people in our study received a home screening kit that checked for hidden blood in the stool. As you may know, the next step after a positive test is a more in-depth procedure, such as a flexible sigmoidoscopy or a colonoscopy.

Now, I don’t know if any of you have had experience talking a stranger into getting screened for colon cancer, but it’s a difficult task. The first thing that comes to everyone’s mind is a colonoscopy. We all know colonoscopies can be uncomfortable and invasive, and I’m told the worst part of it all is the prep. I say “I’m told” because as a sophomore in college, I was too young to need colon cancer screening. Many people I called would say “Why are you asking me to get a colonoscopy when you haven’t even done it yourself?” I was caught off guard, but they were right: I had never been screened for colon cancer, and apparently, everybody knew it.

For each study we work on, research interviewers receive a set of “recommended responses” that give us answers to questions potential study participants might ask. But there was no recommended response to: “You don’t understand. You’re too young, how can you be asking me to get colon cancer screening?”

I was again discouraged and truly stumped. They were right. I had no personal experience with this. What was I doing?

“You saved my life”

But then something happened that changed my entire perspective. I was calling people who had already enrolled in the study and completed their colon cancer screening to ask them to complete a follow-up survey. I had just finished introducing myself when the person I’d called said “you saved my life.”

Not “this study saved my life,” but “you saved my life.” This patient went on to tell me: “If I hadn’t participated in this study, then I would never have found out that I had colon cancer.”

That was the moment I realized that, not only is the work we do here at GHRI truly meaningful, so is my role in it.

That was the moment I realized that, not only is the work we do here at GHRI truly meaningful, so is my role in it. Even though I had nothing to do with the design of the study, I wasn’t an investigator, I wasn’t the project manager—I was simply the first point of human contact for study participants. But it hit me that my persistent calls seemed to make all the difference in the world to this person.

Here I was, a student with no health background who had been taking poetry and writing classes in college—yet I had helped save a life. It was a profound moment that made me realize everyone at GHRI is collectively working toward bettering other people’s lives and that our research truly makes a difference.