At what age are you happiest? 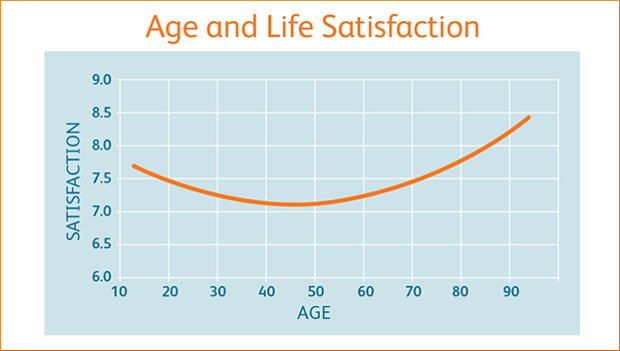 Brookings Institute scholars used Gallup polls to show relationship between age and well being. Respondents rated their life satisfaction relative to “best possible life” for them, with 0 being worst and 10 being best. (Graham, Nikolova)

When are you at your happiest? If we look at that question from the perspective of stage of life, or what decade you’re in (e.g., your 40s or 50s), the answer may surprise you.

Research on general well-being and life satisfaction shows surprising data on when happiness peaks for adults. Group Health Research Institute’s Dr. Eric B. Larson writes in Group Health Cooperative’s nwhealth blog, “In my work on healthy aging, I see how [a] ‘live for today’ attitude often plays out for older people. In fact, the research may surprise you: People age 60 and older generally have a greater sense of well-being than younger people have.”

Dr. Larson adds: “Surveys of happiness conducted in developed countries consistently show a ‘U-shaped’ pattern (see graph above), with people on either end having the greatest satisfaction. In one large study from the Brookings Institute, for example, scientists found happiness was high for 18- to 21-year-olds and then dropped steadily until about age 40. But past middle age, the pattern began to reverse—gradually climbing back up to its highest point at age 98!”

If you’re in your post-college years, the answer to when you will be happiest can be summed up in two words: “Just wait.”

Read the full article: Who’s happier—people in their 40s or 80s?