Proactive boomers will ‘choose their own adventure’ in growing old 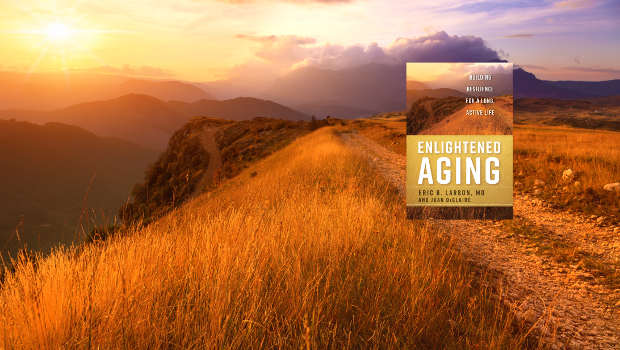 In an excerpt from his new book Enlightened Aging, Dr. Eric B. Larson encourages his generation to build reserves for a long life ahead.

In thousands of conversations over many decades, I’ve heard my patients and study participants express the same wish for old age: They want to live independently in good health, postponing serious illness and disability until the very end.

Scientists call this idea “compression of morbidity,” suggesting that most diseases of old age can be squeezed into a short period at the end of life.

In Japan, the concept is called “pin pin korori” — a phrase that combines words for a healthy and energetic life (“pin pin”) with a word for dying quickly and painlessly (“korori”). Elderly Japanese visit temples or shrines to pray for “PPK” — healthy longevity followed by a good death.

The idea is popular for good reason: It gives you as much time as possible to pursue your proverbial “bucket list.” Does that include travel, volunteer work, hobbies, or more time with family? It’s up to you. The point is, you get to choose your own adventure, unencumbered by sickness and disability.

And here’s the good news for baby boomers: Science suggests this generation now has a better chance than previous ones to experience old age with less illness. This is due in large part to socioeconomic and medical advances that allow us to prevent or postpone common conditions, especially cardiovascular disease and maybe even Alzheimer’s.

But this opportunity is by no means universal or guaranteed. Our longevity and wellness still depend on many individual factors, such as our inherited risks and our lifestyle. So while more and more boomers can now see the brass ring — that is, a longer, healthier old age — only some of us will get the chance to grab that prize. I believe the advantage will go to those who can anticipate the mental, physical, and social reserves they’ll need for old age.

Learning from one parent’s experience

Paul Leland, 56, is an architect and avid bicyclist who was just diagnosed with high blood cholesterol — a trait that he may have inherited from his father Tom, who died at age 89. Paul never expected his dad to live that long because Tom had so many chronic health problems made worse by his obesity. An ex-smoker with type 2 diabetes, Tom suffered his first heart attack at age 51 when Paul was a teenager. Even after bypass surgery, Tom’s heart problems continued. He also had chronic digestive problems, painful arthritis in his knees, and depression.

“My dad just seemed to go from one health crisis to another,” Paul remembered.

By his mid-seventies, Tom started having intermittent problems with his memory — issues his doctor attributed to transient ischemic attacks (TIAs) or “mini-strokes.” And by his eighties, Tom had mild dementia, probably the result of ongoing cardiovascular problems. Because of his mobility problems and dementia, he rarely wanted to leave his apartment. He died in a hospital at age 89 after complications from surgery for a bowel obstruction.

Over the years, I have known many patients with health histories similar to Tom’s. They live a surprisingly long life thanks to modern medical care, but their quality of life is not good. Advanced life expectancy allows patients to live longer, but they’re being saddled with years of disability and dependency.

That’s not to say that all was misery for Tom. “My dad was happy at times — especially when the grandkids came around,” said Paul. “He used to talk about buying a used motorhome and fixing it up — maybe taking it on a cross-country trip.” But with his health problems and financial pressures, that dream never materialized.

Paul is adamant he won’t follow his dad’s example. Retirement is still a few years away, but Paul and his wife hope to do some cycling tours in Australia and Europe. They want to stay as active as possible as long as they can. “We don’t want to spend our last 30 years too sick to do anything but watch TV.”

Let’s do this differently

With his presumed inherited risk for cardiovascular disease, Paul knows that he needs to take his health seriously. Fortunately, like many boomers, he has several advantages that many in his father’s generation never enjoyed.

For one, Paul’s education gives him a basic understanding of the science behind today’s health advice. He realizes a healthy lifestyle can help him counter his inherited risk. That’s why he never smoked; why he exercises regularly, eats right, and takes the drugs his doctor prescribed for his cholesterol. Contrast this with Tom and his cohort. Like so many men of his generation, Tom started smoking when he was in the military. He also had little understanding of the way nutrition and physical activity affects health.

Paul also knows he could actually live quite long — maybe into his nineties. That awareness may be an incentive for investing in prevention — i.e., being physically active, eating better, managing his stress. Tom, on the other hand, probably imagined a much closer death — especially after he had his first heart attack in the early 1970s, when mortality rates for heart disease were much higher. “Nobody imagined that my dad would live to be 89,” said Paul.

And finally, to paraphrase the Rolling Stones, time is on Paul’s side. The process of building reserves for old age begins before birth and continues all through childhood, adolescence, and the adult years. Born to middle class Americans in the prosperous 1950s, Paul has health advantages over his dad who was raised during the Great Depression. And even in middle age, Paul still has plenty of time to amass reserves for use later on.

To live comfortably and independently, as so many seniors wish to do, requires preservation of four basic functions — thinking clearly, moving safely, hearing, and seeing. Over time, the body’s aging processes chip away at these abilities. But as an activist ager, you can adapt to such changes, building reserves to maintain function, staving off disability as long as possible. Your reserves may include many factors such as your brain cells, your intellect, your blood vessels, your friendships, your muscles, your savings account — all of it.

It may help to think of yourself as an athlete getting ready for a marathon. Instead of a morning race, however, you’re preparing for decades of senior living. If you want to make it to the finish line, you need resources to last the entire race.

The more reserves you have going into old age, the more resilient you’ll be when facing late-life challenges. By resilience, I mean the ability to withstand physical or emotional setbacks, to recover from them, and to keep going. Like a tree that has weathered many storms, resilient people have the ability to “bend, not break” under pressure. They can bounce back from adversity, sometimes stronger than ever before.

Growing old presents plenty of opportunities to put your resilience to the test. As one of my patients says, “Aging is not for sissies.” Trials range from serious illness, to the diminishment of skills and senses, to the loss of many dear friends and relatives. But if you come to aging fully resourced, activated, and aware of the challenges ahead, you’re going to have a much richer, more satisfying experience.

Many of my patients have possessed these qualities. But I can think of one whose stalwart comeback in old age was particularly remarkable. Ben was born in 1906 on a farm in Kansas, where he rode his horse to school each day, and enjoyed playing sports and reciting poetry. He became a high school teacher and coach before earning his doctorate and becoming a college professor.

Through adulthood, Ben’s life was a rich mix of intellectual and physical challenges. On a daily basis, he stayed vigorous by walking to work and gardening. In retirement, he bought a small farm where he raised Arabian horses. He kept his mind engaged with reading, writing, and publishing poetry. He revised his textbook on school law. As Ben grew older, the horses “kept him going,” his son-in-law told me. Even at age 85, after his wife of 56 years passed away, he kept caring for his horses.

But one day, when Ben was 90 and tending to one of the horses, something went wrong with the lunge line. Somehow, he got caught in the rope and was knocked to the ground, suffering many nasty, ugly bruises and several broken ribs.

When I saw him in the hospital, battered and confused, I was afraid he would not recover from the trauma of the accident, let alone return to his small farm. Most people his age, with injuries so severe, would not survive. But what happened over the next two months was nothing short of miraculous. Ben began to heal and regain his strength. After a few days, he was moved to the hospital rehabilitation floor, and then to an outpatient rehabilitation facility where he stayed for a month. Not only did he reclaim his bearings and mobility there, he also made many friends among the patients and staff. After he was released, his new friends visited the farm to meet his beloved beasts.

Once home, Ben gradually increased his activity. Eventually he developed a routine of walking two to three miles a day. And for several more years, he was able to enjoy his horses — albeit with a lot of caution to prevent another accident.

The possibilities are amazing

Looking back, I think of all the “reserves” Ben had accumulated that allowed him to live independently for so long and then to recover from his accident. He was a wiry guy of average build, but according to family lore he could do the work of a full-grown man when he was only 12 years old. He became a sought-after farm hand and high school athlete who stayed physically fit into adulthood. Little did he know how much that foundation of bone and muscle mass would come in handy when he was 90 and older, and healing from his injuries.

But Ben’s strength would not have mattered if he had not had enough brain reserve to stay mentally well and independent in his nineties. More than half of all people suffer dementia by age 95, but not Ben. His brain was in good working order, perhaps because he had kept his mind active so much of his life — not only during his career teaching, but also into retirement, when he was consulting, writing, and publishing poetry. Like many resilient seniors who recover from the stress of illness or dangerous medications that cause confusion, he was able to “bend but not break.” His social reserves were also a benefit. Without the support of his kids, grandkids, and neighbors, he might not have been able to go back home.

I had the pleasure of attending Ben’s 100th birthday party where he entertained the crowd with a witty poem about his life, “past, present, and future.” He lived another year after that and died comfortably at age 101.

Enlightened aging means building, protecting, and enhancing your reserves for a resilient old age. It requires building strength in three ways — mentally, physically, and socially. In fact, your well being depends on your ability to build strength across the board — a truth I didn’t fully appreciate until quite late in my career. Now, thanks to the lessons I’ve learned working with patients like Ben and many, many others, I understand how amazing the possibilities are. I can see the potential for postponing disability and enhancing the quality of life even as you reach very old age.

Learn more about Dr. Larson’s book and his approach to enlightened aging.