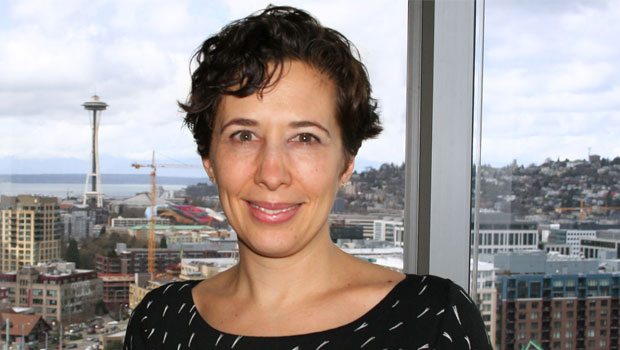 “It was my dad’s experience that inspired me to go into cancer research,” says Erin J. Bowles, MPH, a senior research associate at Kaiser Permanente Washington Health Research Institute (KPWHRI). When Ms. Bowles was 17, her father was diagnosed with multiple myeloma — and given three years to live.

In 2002, after earning a master’s in epidemiology at the University of Washington (UW) and working with scientists at the Fred Hutchinson Cancer Research Center, Ms. Bowles started working as a research associate with the KPWHRI’s Cancer Research Group.

“I’ve grown up at the research institute,” Ms. Bowles says. She started here working on the Breast Cancer Surveillance Consortium (BCSC). Now a senior research associate, she has worked on 16 NCI-funded grants and served as site principal investigator on multisite projects. She has done everything from writing grants and first-authoring publications to managing data quality and doing biostatistical analyses. She has mentored collaborators at the UW and Fred Hutch. And she actively works with clinical staff at Kaiser Permanente Washington to translate research into practice.

Ms. Bowles has had significant roles on many studies that have improved cancer care and screening, including those that found:

Now Ms. Bowles has earned a Research Specialist Award from the National Cancer Institute (NCI). It is for “exceptional scientists who want to pursue research within the context of an existing cancer research program, but not serve as independent investigators.”

This is the first time that the novel award has been given: Around the country, 34 research scientists, chosen from more than 200 applicants, received it. Ms. Bowles’ application was given a perfect score of 10. And unlike the other awardees, she is doing practical — not basic — research and doesn’t have a PhD.

“I never expected to get my own grant,” Ms. Bowles says. “It will give me more autonomy regarding what I work on. And even if a project’s funding ends, it means that my work on that project can continue.”

The award will support her work on these major NCI-funded cancer collaborations:

“The prestigious award is a testament to the critical role Erin plays in our Cancer Research Group,” says Associate Investigator Jessica Chubak, PhD, who is also the site PI for the CRN.

“This grant is designed to support individuals who are ‘vital to sustaining the biomedical research enterprise,’ which perfectly describes Erin’s role as a critical partner in our NCI-funded research,” says Senior Investigator Diana Buist, PhD, the site PI for the BCSC. “Erin has been a critical member of our research teams since 2002, playing a significant role in extending our ability to conduct research and increasing our research reach and impact through relationships with clinical and operational champions.”

“I am proud and honored to receive this award and continue my passion by working on cancer projects at the Institute,” Ms. Bowles says.

“And I know my dad is even prouder,” she adds. Three bone marrow transplants and 22 years after his myeloma diagnosis, he is thriving.