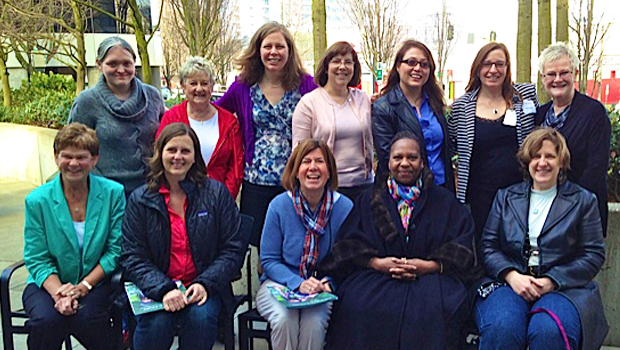 For the three million women in the United States who’ve survived breast cancer, difficult health care choices come with the territory. But even after successful treatment, an important question lingers: Should they consider magnetic resonance imaging (MRI) in addition to mammography for ongoing breast cancer screening, or “surveillance”?

It’s a question science hasn’t yet answered. Group Health Research Institute (GHRI) Assistant Investigator Karen Wernli, PhD, is on a mission to change that with her new study, SIMBA (Surveillance Imaging Modalities for Breast Cancer Assessment). As one might expect, SIMBA will involve national data, epidemiology, and clinical knowhow. But Dr. Wernli and team have added an often-missing ingredient: first-hand feedback from women who’ve had breast cancer.

Using patients’ perspectives to boost what data can do

On March 13, Dr. Wernli’s team hosted 11 breast cancer survivors from the Puget Sound region at the first official meeting of the SIMBA Advisory Board. Members represent a variety of personal and clinical experiences and will guide the study team as they develop a decision aid to help women and their doctors weigh the pros and cons of different imaging regimens.

Mammography has long been the clinical standard for surveillance, but use of MRI is rising—even without evidence that it’s more effective.

“Because MRI is newer and more expensive, people may assume it’s better,” explained one board member. “We need descriptions of both methods and how effective they are.”

That sentiment was echoed by SIMBA’s clinical advisors, who described the need for “appropriate, real-world recommendations” about how both methods perform in different groups of women.

For data needed to answer such questions, SIMBA will tap the Breast Cancer Surveillance Consortium (BCSC)—the nation’s largest collection of breast imaging tests and cancer outcomes. But first the researchers will ask their patient advisors which outcomes are most important and how to distill that information into an effective decision-making tool.

Leading the way are SIMBA’s two patient co-investigators, Mary Bush and Dianne Johnson, who helped develop the project and serve as liaisons between the advisory board and the scientific team.

“Among the highlights for me so far was contributing to the proposal,” commented Ms. Bush. “I like giving input from a patient’s perspective.”

“Our data come from a national resource,” Dr. Wernli explained. “So to get the full picture, we are reaching out to women from across our region and other parts of the country.”

For many, it’s a chance to finally have a voice in research that could save their lives.

“I’m glad you’re listening,” one board member expressed. “Sometimes it feels like the research is down a knot hole and we’re all wondering, ‘Why is that important?’”

Writing a recipe for research that’s meaningful to patients

Letting patients’ perspectives drive research priorities is gaining steam, thanks in part to the Patient-Centered Outcomes Research Institute (PCORI), which funds SIMBA. The approach challenges many scientists to rewire how they’ve traditionally conceived of and conducted research. Studies like Dr. Wernli’s can help show the way.

“Sometimes I feel like I’m writing my own cookbook,” she laughs.

Her first step came just weeks before the PCORI submission deadline, when she approached Ms. Brandzel with an idea for the SIMBA study. The duo quickly recruited a focus group using various channels, including:

“I was just trying to find one or two women from the focus group to partner with us on the project,” recalled Dr. Wernli. “I was shocked when everyone who attended was interested in participating more. They all wanted to help.”

After Dr. Wernli’s first PCORI application wasn’t funded, her team collaborated on a successful resubmission, working with their patient co-investigators and staying connected with the women who would eventually become SIMBA Advisory Board members.

“Karen’s approach was, ‘I may be an epidemiologist, but I can’t speak for women who’ve had breast cancer,’” Ms. Brandzel explained. “Engaging patients at this level requires a certain level of humility, patience, and intuition. But it’s doable.”