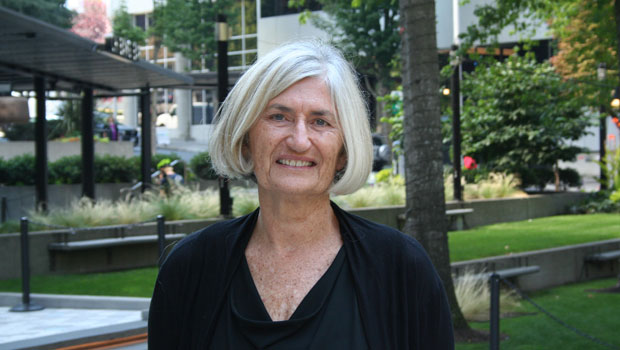 Looking back on a career that reshaped how health systems tune in to patient perspectives.

Judith Schaefer was thrilled to land a job as a research associate at the MacColl Center for Health Care Innovation in 1995. A single mother living with a rare neurological condition, Judith felt fortunate to land a job so well aligned with her research interests and life experience.   She could not have foreseen, however, the positive impact her work would eventually have.

Now, as Judith begins her retirement, she does so with a sense of joy, optimism, and dramatically improved health.  A physically energetic 70-year old, she looks forward to continuing regular walks and visits to the gym. She can also look back on her success at changing chronic illness care globally—making it much more responsive to real people’s real-world needs.

That wasn’t a routine priority for health care some 30 years ago, when Judith was diagnosed with myasthenia gravis, a chronic condition and autoimmune disorder that’s characterized by weakness and fatigue.

Back then, most patients with chronic illness “didn’t believe they could do anything to improve their well-being,” Judith recalls. “Health care didn’t prepare them to take care of themselves.”

But that’s the kind of support Judith knew she needed.  “My symptoms were at times severe, and I worked to manage them, but I wished there could be an engineer to help me,” she recalls. “I wanted a coach to help me make medical decisions.”

Meeting the challenge of chronic illness

Despite the limitations of myasthenia and the challenge of raising two small children on her own, Judith pursued her education. With help from the State Division of Vocational Rehabilitation, she earned a master’s degree in public health from the University of Washington. She wanted to link her education with the experiences she had as a patient. So, she followed her advisor’s recommendation to talk with Ed Wagner, MD, MPH, MacColl Center founder and UW professor of public health.   “Ed was forming a team that would directly address the improvement of health care for people with chronic conditions,” Judith recalls.  “I was grateful for the job and I felt very interested in the work, but I didn’t have any idea what an opportunity it was.”

Ed remembers Judith’s constant reminders to focus on the patient’s point of view. “Judith expressed frustration with the patronizing way in which she was treated by professional caregivers and the submissive role expected of her,” remembers Ed.  “Rather than become bitter, she decided to devote her career to changing the way patients are treated.”

“With Judith at the table, we were relentlessly reminded to think about the impact of our ideas on patients’ confidence and skills in managing their illness,” Connie remembers.

After the team published the Chronic Care Model (CCM) in 1999, health care systems large and small sought the MacColl Center’s assistance to implement the model.  Ed, Judith, Connie, and others traveled nationwide, facilitating learning collaboratives based on the Institute for Healthcare Improvement’s Breakthrough Series methodology.

Judith says the challenge often felt overwhelming. “Many times, I felt out of my depth because my experience prior to this was one of living with an illness, not with the inner workings of the health care system,” she remembers.  “I had to learn what it meant to deliver health care.”

But soon, Judith became recognized as a leading advocate for self-management support—an aspect of the CCM that was frequently difficult for practices to implement because it requires culture change—along with skills and tools that didn’t yet exist.

“Judith was at the forefront of a movement that shifted our perspective,” says Paula Lozano, MD, MPH, KPWHRI senior investigator and associate medical director for research and translation with Washington Permanente Medical Group.  “I needed her in my life to show me what it looked like to think about health services in a patient-centered way.”

As the MacColl team responded to the rapid uptake of their work, Judith began giving talks to increasingly large audiences around the world.  She vividly remembers a training on self-management support for 900 participants.   “I was always on the edge of learning something new and pushing a little bit harder.  It was amazing. But I wasn’t trained in public speaking, and the learning curve was astronomical.”

When Judith’s chronic disease symptoms intruded, she persevered.  “Myasthenia caused my facial muscles to grow tired, and sometimes I’d lose my ability to articulate clearly,” Judith recalls. “But the message was the critical issue.  I’d prop my thumb under my chin and continue.”

With more experience working among clinicians, Judith’s own frustration with the health care system began to heal.  “I had a real epiphany at one point that doctors were struggling so hard,” she explains.   “They were put in a very difficult place, being expected to cure what is incurable or find ways to deal with things that were far beyond their training.  I began to feel so much compassion.”

When Judith collaborated with researchers and providers who were also open about their own struggles with chronic illness, this shared experience enriched their work. “We both believed that perhaps our greatest tool has been to say ‘we’ to patients, rather than ‘you’,” says Alan Glaseroff, MD, a Stanford University adjunct professor of medicine and former chief medical officer at the Humboldt County Independent Practice Association.

Over the years, the MacColl Center’s work in chronic illness care has merged with its efforts to train primary care teams nationwide in implementation of the patient-centered medical home. Judith’s role in this work became increasingly focused on developing content and learning communities.  A certified master trainer of the Chronic Disease Self-Management Program, she authored a self-management support training manual for clinicians that’s become a standard reference for providers.  She assisted in the development of an Agency for Healthcare Research and Quality resource center for self-management support and created a network of learning communities with the consulting firm Abt Associates.

“We found joy in work through partnership, building high-functioning teams, and striving for technical excellence.  It has been an extremely satisfying working relationship and, ultimately, friendship,” says Abt Principal Associate Lisa LeRoy, PhD, with whom Judith has partnered for the past ten years.

Now ready to take on the world

Today Judith is still an empowered patient who self-manages a chronic condition.  She says that she’s working on how to feel vital and alive and healthy:  emotionally and mentally, as well as physically.

“Judith is so brave,” says MacColl colleague and friend Katie Coleman, MSPH, director of the Learning Health Systems Program at KPWHRI.  “She doesn’t shy from hard things, but walks right into them and is willing to accompany and abide and be active in creating beauty. There is always another perspective to take, another way to look at a problem. When you’re talking with Judith, your world expands. “

As for what’s next, Judith’s eyes light up when she says, “I didn’t have the courage to travel in my teens or twenties.   So, I’m going to spend my early retirement years seeing as much of the world as I can.  I’m planning to start in Italy.” 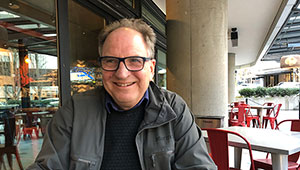 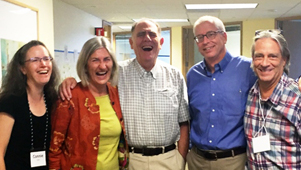 6 habits for finding joy in work