On a visit to KPWHRI on March 16, 2020, Jennifer Haller became the first person to be injected with a COVID-19 vaccine in a clinical trial

Jennifer Haller was not looking for the spotlight. A people operations manager for a small tech start-up in Seattle, she loved spending time at home with her 2 teenage children, escaping the city to hike in the Cascades, and fostering rescue dogs that had been nearing their final days at a shelter. Her life took an unexpected turn a year ago when she chose to participate in the first phase 1 clinical trial of a vaccine against COVID-19, taking place at Kaiser Permanente Washington Health Research Institute (KPWHRI). She received the first shot on the morning of March 16, 2020.

Haller was widely hailed for her courage. The many media interviews she did offered hope to people around the world. She raised awareness of the promising efforts under way at the National Institutes of Health, the biotech company Moderna, Kaiser Permanente and other clinical trial sites to develop a vaccine that could help to end the pandemic. To mark the anniversary of the initial injection — the shot heard 'round the world — she kindly answered some questions.

KPWHRI: It’s easy now to see that this trial was historic, but at the time you volunteered did you have any inkling of that?

Jennifer Haller: I didn't know. A friend of mine posted on Facebook that Kaiser Permanente Washington was opening up a trial, and I thought that maybe I would be a good match. I just filled out the form. Soon after that I was enrolled in the trial.

Once I got involved in the study, they made clear that this vaccine had not been tried on humans and that we could leave the trial if worried. Still, I didn’t know that I was going to be the actual first person to get it.

KPWHRI: You wound up doing more than 50 interviews about your experience. Many of them came in the first few days after you received the shot on March 16. Why did you decide to do them?

Jennifer Haller: Things had become pretty dark by March 16. There was so much unknown. This was a really important, positive story that people could focus on. And so it was a joy for me to be part of that good news and to give people hope that we're going to get through this — and that science is going to help us. I trust science. I trust all the people that were working as hard as they could to find a solution for us at the time.

Also, a big piece for me is recognizing the privilege that I have in my life. I grew up in an upper-middle-class white family in the suburbs of Seattle. During the pandemic I was able to keep my job. I am able to work from home. My kids have everything they need to be successful with online school. I was looking for, how can I help? I always have my eye out for ways that I can help. Even just driving, I've got my eyes on everything that's happening around me and looking for situations where I can help.

KPWHRI: Can you walk us through the experience of getting the shot?

Jennifer Haller: I was getting ready to go to bed the night before when I read a breaking AP [Associated Press] story. It said that the first vaccine dose was going to be given the next day [March 16, 2020] in Seattle. I'm thinking, “Hmmm, my appointment is at 8 a.m.; that’s pretty early; I wonder if that's the first.” I was amused a little bit, and I thought that would be kind of cool. I slept fine.

When I got into the clinic that morning I asked whether I was first, and yeah, sure enough, I was. There were 3 other people there that were participating in the trial that day; the others had appointments at 8:30, 9:00, and 9:30.

The clinic was very calm, yet full of energy at the same time. I had a blood draw and had the chance to sit down with Lisa Jackson [the KPWHRI scientist leading the trial], which was a great opportunity to ask any final questions. And then I was in the exam room getting ready for the injection. I centered myself and took a deep breath. What was going through my mind was, "Hey Jen, you've done this before, this is like another flu shot, it’s all good.”

I hung around for an hour after the shot for observation. They did a final check, looked at the injection site on my arm, checked my vitals, making sure that I was still feeling good. I was, so I was free to go.

The AP was there to take the photo of my getting the first shot. I did an interview with the reporter in the clinic afterward. Then the minute I stepped out of the clinic and turned my phone back on, it started blowing up from all the requests from reporters.

KPWHRI: How did you feel the first 24 hours after the shot?

Jennifer Haller: I felt totally fine. The only side effect that I experienced was a sore arm the next day, but I didn't have any other side effects. I need to point out that because I was in the phase 1 safety trial and because I was in the first group to get the shot, I had only 25 micrograms of the vaccine. They needed to test out how we would react to a smaller dose. The full dose ended up being 4 times that — 100 micrograms. That may explain why I had pretty limited side effects.

KPWHRI: You showed tremendous courage in volunteering, and then you doubled down when you stepped into the public spotlight. Did you have experience doing this sort of thing?

Jennifer Haller: I am absolutely terrified of public speaking. I always claimed that I'm inarticulate, and I'm not the right person to be delivering public messages like this, but it turns out that I'm OK at it. What I like to focus on in these interviews is recognizing privilege and how to use it to help others.

Life has handed me opportunities to see how strong I can be and this was one more of those opportunities that I've been gifted. I am hopeful that my experience can help encourage others to see that within themselves.

KPWHRI: Are there any particular moments from the past year that you’d call out?

Jennifer Haller: One of the coolest memories is that Kamala Harris tweeted about me! She called me a hero. I couldn’t believe that. I was also really moved when I came into the clinic for my 6-month checkup, and they had 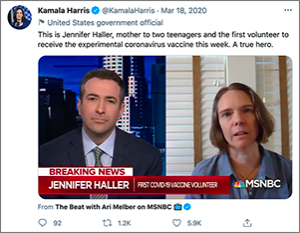 received a letter addressed to me: It was a very thoughtful thank-you note from this wonderful woman in Ohio.

At one point, I was taking my daughter for her allergy appointment. We were both wearing masks. We walked past an office, and this guy jumps out, all excited, asking "Are you the one who got the vaccine?" I was amazed that he could recognize me in my mask. I thought that was hilarious.

There were some terrible, terrible things said about me on the Internet. It was good for my kids to learn not to read the comments on Instagram, TikTok, Twitter, and Facebook. I try to put that in perspective. I literally had over 1,000 positive messages, unsolicited. Just messages of love, support, and thank you. That was amazing.

KPWHRI: You’ve visited the clinic at KPWHRI more than a half-dozen times over the last year. What’s that been like?

Jennifer Haller: Everybody has been so professional while also so caring and thoughtful. They have to be very careful about what they say, but they always handle that very gracefully. I feel so much care and love when I'm there, and it just feels wonderful every time I show up.

KPWHRI: In November, it was announced that the vaccine had an efficacy of about 95%. How did you feel?

Jennifer Haller: My mom emailed me about it that morning as I was waking up. She's always emailing me articles. I just remember the excitement that, wow, this is beyond anybody's wildest dreams of what a positive outcome could be. I reached out to the gentleman who was the one to get the second shot. We have been in touch since early in the trial because we both did media. It's been fun to have a buddy with the same kind of investment and involvement in the process. I contacted him because it was a milestone we could share. And then we did some interviews after that.

KPWHRI: The clinical trial recently was approved to give certain participants a booster shot. Have you had yours yet?

Jennifer Haller: I received my booster shot last Tuesday [March 9, 2021]. As I said earlier, the first one I received was 25 micrograms, and that was the same for the second that I received a few weeks later. The booster has 100 micrograms.

What's really cool is that I did experience side effects the day after this time around. I felt awful! That's really exciting to me because I believe that shows how the vaccine is causing an immune response. That means it did its job. So I was really happy to feel bad for a day. And now I feel perfectly normal. 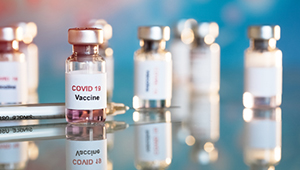 Looking back: Our COVID-19 vaccine trial at 1 year

Dr. Rita Mangione-Smith reflects on the year since KPWHRI launched the world's first clinical trial for a COVID-19 vaccine. 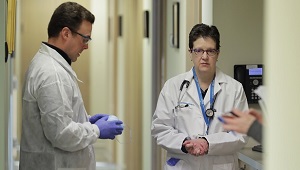 ‘Fighting back’ against COVID-19: Remembering a historic trial 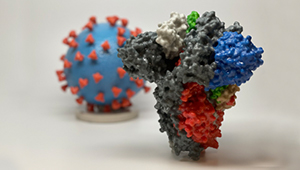 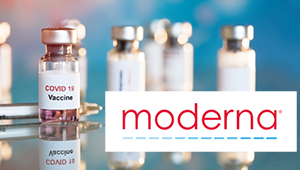 The investigational vaccine that KPWHRI’s team first tested shows an efficacy rate of about 94% as research continues. 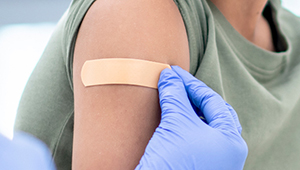 A registry started by KPWHRI last year has sped up studies needed to protect the world against the novel coronavirus.