Research has suggested that gastric bypass is a promising way to curb type 2 diabetes among patients who are obese. But big questions remain about the surgery’s long-term impact on diabetes remission and relapse.

A recent study led by Group Health Research Institute (GHRI) Associate Investigator David Arterburn, MD, MPH, is helping find answers. Published in Obesity Surgery in 2013, his team’s paper— “A Multisite Study of Long-term Remission and Relapse of Type 2 Diabetes Mellitus Following Gastric Bypass”—has garnered much interest. According to the journal’s website, it was their most downloaded and second-most cited article in 2013 and 2014.  It was also their second-most mentioned article in social media in 2014.

Dr. Arterburn’s multi-site study team examined the long-term rates of diabetes remission and relapse in three integrated health care delivery systems in the United States: HealthPartners in Minnesota and Kaiser Permanente Northern California and Southern California. The study involved more than 4,400 patients with uncontrolled or medication-controlled diabetes who had gastric bypass from 1995 to 2008. Study findings included: 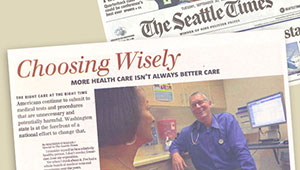