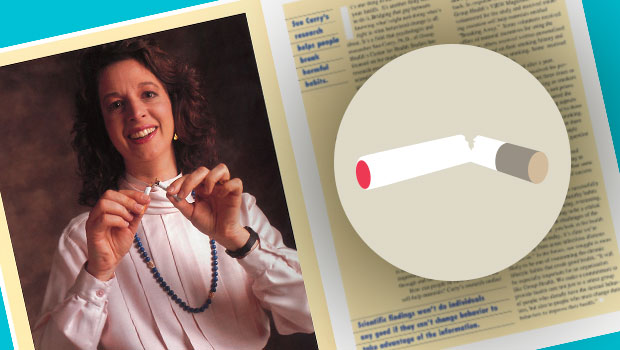 Sue Curry, PhD, was recognized in Group Health’s 1988 annual report for work she and colleagues did that has now helped millions nationwide.

In the run-up to Group Health’s pending acquisition by Kaiser Permanente, I got a survey asking, “What’s the most significant impact or contribution Group Health made to Washington state and/or the nation?”

That’s all terrific stuff. But one story bears repeating as a singular achievement with far-reaching consequences for preventing suffering and saving lives: Back in the early 1980s, Group Health began a journey that literally broke tobacco’s stronghold on America’s health.

I was an editor at Group Health’s membership magazine then—and a “social smoker,” lighting up occasionally, but not yet hooked. So my memories of smoking in the office are vague. To jog my memory last week, I called my old friend Neal Sofian. He now directs member engagement at Premera Blue Cross, but he used to work at Group Health’s Center for Health Promotion, where he was instrumental in anti-tobacco work.

“Were we really allowed to smoke at our desks then?” I asked him. “Or was that just a bad dream?”

“It’s true,” Neal told me. Like the folks on Mad Men, Group Health staffers—including nurses and doctors—could smoke in some work areas, he said. And hospital patients could smoke in their rooms.

Group Health’s tiny Health Education Department was doing its best. They offered stop-smoking classes to members and employees, but only a couple hundred people a year signed up. With about 63,000 adult smokers in Group Health’s population (around 25 percent), classes weren’t making a dent.

Heroes among us were calling for change. “Remember Judy Miller, the health educator who passed away a few years ago?  She was the godmother of it all,” Neal told me. “She kept saying, ‘Group Health needs to deal with both smoking in the workplace and smoking in general. How can we not address the most common cause of preventable death in the United States?’ She wouldn’t let it go.”

Meanwhile, managers and staff were hard at work making our facilities smoke-free. A 1986 Los Angeles Times article touted Group Health and other Northwest businesses for taking the lead nationally. It was news because people didn’t believe it could be done, Neal explained: “They said, ‘That’s against the law!’ ‘You’ll get sued!’  ‘Smokers will riot in the hallways!’”

Sure, people resisted. Nicotine is among the most addictive substances around. But by phasing in the smoke-free workplace over several months and offering smokers support in quitting, Group Health did it! We banned smoking, creating a healthier environment for all employees and patients. We also became a national model, consulting with others who wanted to follow suit.

At the same time, Group Health providers were taking steps to help their own patients quit. Led by family practitioner Dr. Tim McAfee (now with the Center for Disease Control and Prevention’s Office of Smoking and Health), Group Health established protocols that dramatically boosted how many patients were routinely screened for tobacco use—and offered help to quit—during primary-care visits. Thanks to such efforts, the smoking rate fell from 25 percent to 15.5 percent over a decade in the Group Health population, according to results Tim, Neal, and others published in 1998.

Over time, Group Health began covering the Free & Clear smoking cessation program for its members. This came after GHRI’s Dr. Sue Curry (now dean of the College of Public Health at the University of Iowa) and others published in the New England Journal of Medicine that coverage would raise our patients’ stop-smoking rates. This finding inspired changes in coverage for smoking cessation treatment around the country.

Free & Clear kept growing, especially after 1998’s Master Tobacco Settlement Agreement, requiring tobacco companies to fund states’ nicotine dependence treatment for all residents who wanted to quit. By 2004, the enterprise was so successful it was spun off to become a separate for-profit company that’s now part of Alere Wellbeing (a subsidiary of Optum), the leading provider of tobacco quitline services in North America. To date, more than three million people, including tens of thousands through Group Health, have been offered Alere’s “Quit for Life” program, endorsed by the American Cancer Society. The program is also offered through 25 state-funded tobacco quitlines and hundreds of commercial contracts with health plans and employers.

Still work to do

More work remains ahead. About 17 percent of Americans smoke, and tobacco is still the most common preventable cause of death. But that beats 32 percent, the level when Group Health first entered the ring in 1983. And our work goes on. GHRI researchers led by Senior Investigator Dr. Jennifer McClure, continue to collaborate closely with Alere Wellbeing, Fred Hutchinson Cancer Research Center, and others to facilitate smoking cessation. Current GHRI research includes efforts to identify the genes associated with nicotine dependence, test new forms of counseling, and develop highly personalized interventions that can be delivered by smartphone or web.

Looking back, I wonder how Judy Miller would have felt about our progress so far on beating back tobacco. Maybe she’d feel as I do—proud of the history. But the story also makes me feel optimistic that we can help solve other seemingly intractable problems: the obesity epidemic, the opioid crisis, and social disparities in health care. Perhaps someday we’ll view these issues like we do smoking, which—thanks in large part to Group Health—no longer seems so hopeless.

Want to quit smoking?  November 17 is the American Cancer Society’s Great American Smokeout, an opportunity to get the support you need to quit tobacco.

You can also read about recent GHRI research on smoking cessation and its current quit-smoking studies. And you can learn more about quitting smoking, including making a quit plan, gathering your support team, trying again, and avoiding weight gain. 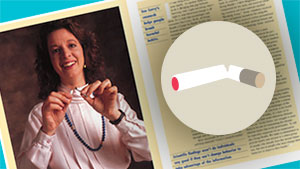