Prepping to fight the next flu pandemic 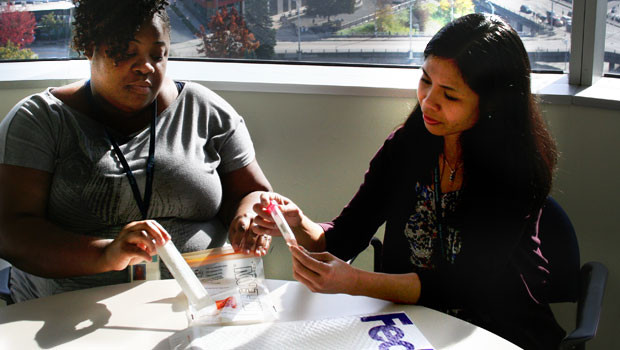 Research Specialists Margie Wilcox and Vina Graham sent self-test kits to Group Health flu patients for a small study that could someday make a big difference in our nation’s health.

November brings the start of flu season—a great time to get your flu vaccination, which the Centers for Disease Control and Prevention (CDC) recommends for everyone age six months and older. Officials predict this season will be routine. The shot will be more effective than last year’s, and there should be plenty of vaccine to go around.

At the same time, scientists at Group Health Research Institute (GHRI) and elsewhere are testing practical innovations like a self-swab test to prepare for a potential threat that’s not so routine: a flu pandemic. That means a global outbreak of a new flu-virus strain for which people have little immunity and no vaccine exists. When a flu pandemic strikes, the disease spreads easily, swiftly causing serious illness in large populations. For instance, in 2009, H1N1 “swine flu” infected more than 60 million people worldwide, according to the CDC, resulting in more than 12,000 U.S. deaths.

During the next flu pandemic, one of our nation’s most important strengths will be its ability to gather timely, accurate information. Public health officials will need to know how many people have the virus, whether the drugs being prescribed are effective, and whether the vaccine (once developed) is actually working.

Based on the 2009 experience, the CDC sees lots of room for improvement in how health care providers and researchers mobilize to collect information. So the agency is working with researchers nationwide to develop better research protocols and methods. GHRI Associate Investigator Mike Jackson, PhD, MPH, is leading a Group Health team that’s helping to prepare for a flu pandemic—while improving the nation’s ability to respond during routine flu seasons.

Dr. Jackson’s team recently studied a new way to collect nasal specimens quickly and efficiently from patients with the flu. Typically, patients participating in influenza research studies must go to a clinic for such testing. That can be a problem if you’re not feeling well, you don’t want to expose others to the virus, or the clinic staff is caring for an unusually high number of very sick people. So the team came up with a way for research subjects to collect specimens from the comfort of home and send them to the laboratory for testing.

The team recruited 135 study volunteers from among patients who called the Group Health Consulting Nurse for help with flu symptoms during the 2014–2015 flu season. Those who volunteered were sent a nasal-specimen collection kit by FedEx, along with print and video instructions. Volunteers used a cotton-tipped swab to collect the specimen from inside their nose, placed the swab in a sealable test tube, and mailed it to a lab for processing.

The study was designed to answer many questions, including: Would enough people volunteer? Would they return the test quickly enough? Would the specimens be good enough to detect respiratory viruses?

“In calling the patients, we wanted to be as compassionate as possible,” said GHRI Project Manager Beth Kirlin. “We let them know if they didn’t feel well enough to participate, that was OK.”

The team found recruitment was lower than anticipated, but of those who volunteered, more than expected returned the kits.

The volunteers seemed motivated on two fronts, explained Vina Graham, one of the research specialists who called the patients. “They liked the idea that in the future, people with the flu would not have to leave home to be tested,” she said. And they appreciated that in a pandemic, this way of testing “could help everybody.”

“That’s how it is with Group Health members,” Ms. Kirlin added. “They’re generally a good lot who are willing to pitch in.”

In the end, enough high-quality specimens came in on time. Because the approach proved cost-effective and efficient, Dr. Jackson is planning to use it in larger community-based studies of respiratory illnesses. “This is much more affordable and feasible than trying to have nurses collect all the swabs needed,” he said. “This study would not be possible without self-swabbing.”

Other GHRI staff members who helped with the study were Research Specialist Margie Wilcox and Programmers Matt Nguyen and Lawrence Madziwa, MAS.

It’s all part of GHRI’s ongoing efforts to develop safe, effective ways to fight the flu and keep people healthy. 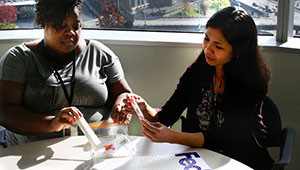